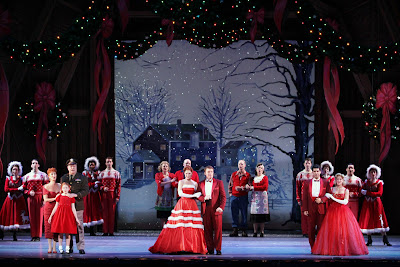 Show Rings in the Holidays at the Bushnell
By Lauren Yarger
It’s snowing, the tree tops are glistening and a film comes to life on stage over at the Bushnell Center for the Performing Arts where Irving Berlin’s White Christmas makes a stop on its national tour through Sunday.

The stage show is based on the hit 1954 movie featuring a number of Berlin’s most popular tunes and lyrics like “Count Your Blessings Instead of Sheep,” “I Love a Piano,” “Sisters,” and of course “White Christmas.” If you’re looking for a serious plot (David Ives and Paul Blake, book), or strong singing voices (there's way too much vibrato up there for me), this production isn’t for you, but if you’re looking for some nostalgia, some great dancing and a wholesome way to celebrate Christmas with the family, get over to the box office.

Standing out is Ruth Williamson as Martha Watson, the general’s assistant, who belts out a couple of numbers (showing the best singing skill in the troupe) and who milks the role for some fun humor. Also fun is James Young as “a-yupping” New Englander Ezekiel Foster.