Theater Review: One Flew Over the Cuckoo’s Nest -- Ivoryton 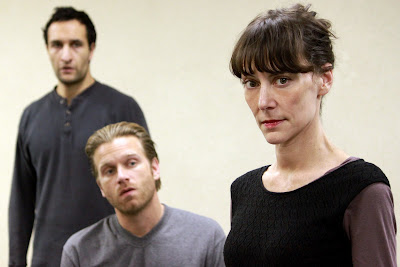 Solomon Landerman, Daniel Robert Sulivan and Andrea Maulella
It’s a Battle of Wills and Sanity vs. Insanity
By Lauren Yarger
It’s hard to tell just who the sane ones are in Dale Wasserman’s dark comedy One Flew Over the Cuckoo’s Nest, a look at the goings on inside a mental health ward, playing at Ivoryton.

The latest “inmate” is Randale Patrick McMurphy (Daniel Robert Sullivan), a gambling trouble maker who might be faking being a psychopath to get out of his sentence at a work farm. He immediately begins to challenge ineffectual Dr. Spivey (Keith Eugene Brayne),Nurse Flinn (Jenna Sisson) and the person who’s really in charge of the rule-driven life on the floor, Nurse Ratched (Andrea Maulella).

The rest of the inmates are reluctant to join McMurphy's rebellion at first, but Dale Harding (Neal Mayer), president of the patients’ association, suicide risk Billy Bibbit (Jonathan Fielding), hallucinating Anthony Martini( Nicholas R. Camp) and post traumatic distress sufferer Frank Scanlon (Douglas Sobon) soon are on board. They and two extreme cases -- Ruckly (John Samela), who’s a catatonic Jesus, and Chief Bromden (Solomon Landerman), who is deaf and mute in the ward, but who talks to his father who lost the Native Americans’ lands -- soon are enjoying McMurphy's antics, including a party complete with girls Candy (Bethany Fitgerald) and Sandra (Jenna Sisson, who in a very brief part, has a comedic command of the stage).

A battle of the wills and for the loyalty of the patients ensues between McMurphey and Ratched with tragic consequences. Who’s crazy here -- the guy who recognizes common sense or the rigid rule enforcer? We even have to wonder how stable two aides (played by Lesley Billingslea and Jovan Davis) are when they torment the patients.

Peter Lockyer directs, but fails to bring out the tension of the conflict between McMurphy and Ratched, who seems too overtly cold and uncaring throughout. The play, based on Ken Kesey’s novel, works best when Ratched’s cruel nature is masked behind a no-nonsense exterior. Likewise, McMurphy doesn’t make an adequate transition in emotion when he realizes that his gambling luck has failed and that Ratched holds all the cards.

Daniel Nischan designs a nice set, using privacy screens to frame the action and to serve as displays for video projections (Tiffany Hopkins, design), nicely orchestrated, but unnecessary to enhance the storytelling.

Cuckoo flies over the Playhouse, 103 Main St., Ivoryton, through Nov. 21. Performance times are Wednesday and Sunday matinees at 2 pm. Evening performances are Wednesday and Thursday at 7:30 pm, Friday and Saturday at 8 pm. Tickets are $38 for adults, $33 for seniors, $20 for students and $15 for children and are available by calling the Playhouse box office at 860-767-7318 or by visiting our website at www.ivorytonplayhouse.org.
Posted by LaurenYarger at 2:24 PM