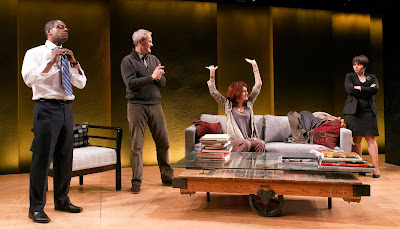 A Comedy of Manners Without the Manners
By Lauren Yarger
It starts as a polite meeting between parents to discuss a recent fight between their sons, but the God of Carnage wins out and soon the competitive, childish and selfish nature of these adults comes out in Yasmina Reza’s play making its Northeast regional debut at TheaterWorks, Hartford.

The play is bitingly funny -- you can’t help but laugh even though it’s too bad this is how people are.

Michael and Veronica Novak (Wynn Harmon and Candy Buckley) invite Alan and Annette Raleigh (Royce Johnson and Susan Bennett) over to discuss the 11-year-old boys’ playground fight in which the Raleighs’ son struck the Novak boy with a stick, knocking out some teeth. High-strung Veronica hopes some tulips, a few drinks and her specialty clafouti dessert will help ease the peace negotiations. Peace, ironically, is important to the author who is working on a book about Darfur.

Annette, nauseous at the thought of what her son has done drags along her reluctant husband, a high-powered attorney who keeps interrupting the conversation to take cell phone calls to try to cover up potential hazards in a drug manufactured by his client.

Soon all pretenses at politeness are lost and the discussions turn hostile -- and humorous -- as feelings beneath the surface emerge, not only about the playground altercation, but about how the husbands and wives really feel about each other and their kids. Manners go out the window and insults, the tulips, the cell phone and the clafouti all get hurled in various ways before it’s all over.

While the script, translated by Christopher Hampton, is a riot (it won the 2009 Tony Award for Best Play), director Tazewell Thompson fails to rein in the actors to give varying levels to the chaos. Buckley is over the top throughout, yelling and using excessive arm gestures. Johnson is all hi-key and doesn’t show contrast with his lack of interest in his wife, his son or the situation in which they have found themselves.

Likewise, Bennett and Harmon, though funny as the passive members of their partnerships, aren’t given much room to change tone when their characters become more aggressive (fueled by alcohol). The pace also isn't as quick as it should be, especially when the hostilities escalate.

It’s a fun 90 minutes overall, though, sure to make you laugh and cringe. God of Carnage runs through Dec. 19 at TheaterWorks at City Arts on Pearl, 233 Pearl St., Hartford. Performances are Tuesday, Wednesday, Thursday at 7:30 pm, Friday and Saturday at 8 pm with weekend matinees at 2:30. There is no performance on Thanksgiving.

Posted by LaurenYarger at 8:49 PM